Being a Creep can be difficult, but it's worth it!

I have always loved the names of groups of animals... herd, flock, pod, murder, congress, and so on.

A group of tortoises, when assembling or living together, is called a creep.

I assume this is because they, well, creep along. In a perfect world, I might call a group of tortoises a mosey or a saunter or a sidle, possibly even a sashay, but I like the term creep well enough, even with its unintended (I imagine) associations and connotations.

I have a creep living in my house (author's note: that sounds awesome!). A year into my life with tortoises, I have three of them living with me, and together (since I'm a part of the group, just ask them) we're Westmoreland, New Hampshire's most diverse and august creep. 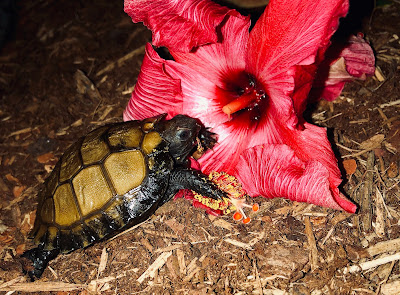 The newest addition is only a few months old, and joined the rest of us two weeks ago. Aretha, a Black Mountain Tortoise, her ancestors native to Southeast Asia. 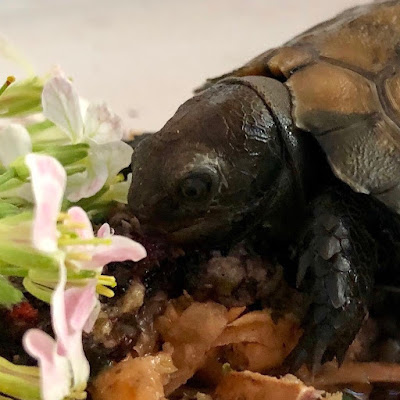 She's settling in to life in New Hampshire nicely. Although she's tiny now (63g and 6.5 cm at her last weekly check), she'll eventually grow to be the biggest of the current members of our creep... her kind is generally considered the fourth largest species of tortoise on the planet. In the wild, they're critically endangered, and it's our hope that at some point in the future we can work to help repopulation efforts in her homeland. 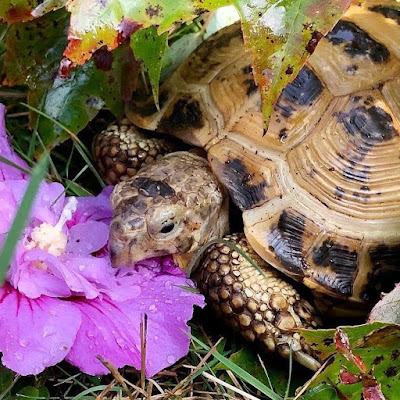 The next newest member of the creep is also the oldest. Chili is a Russian Tortoise whose previous owner no longer wanted him (having kept him for years in sub-optimal conditions); Chili's ancestors (and possibly Chili himself, as they're often wild-caught for the pet trade) come from Russia and any number of the -stans. 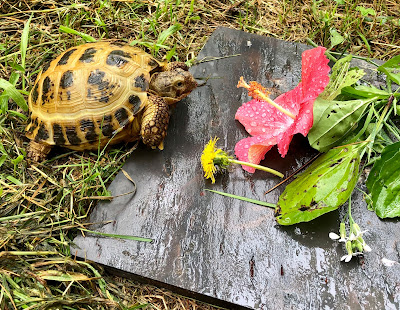 The first order of business upon folding Chili into the Spofford Road Creep was to work on getting him back into better shape... this meant daily soakings to combat longterm dehydration, getting him outside so he could get some UV and also learn to walk again (years of living in a 10g tupperware container meant a stationary life, which goes against everything this species of tortoise is about), and improving his diet (he'd been living mostly on lettuce for the last few decades). He's adjusted to his new life quickly and seems well on the mend. He's essentially full-grown at 462g and 13.5cm (picture a slightly squat can of soda). 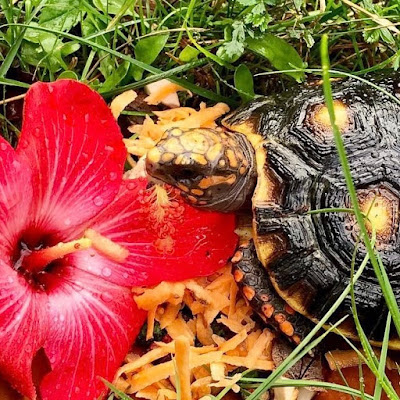 The first tortoise to come and live with me, the founding member of our creep, is Darwin, a Redfoot Tortoise, native to South America. He's been living with me for a year. 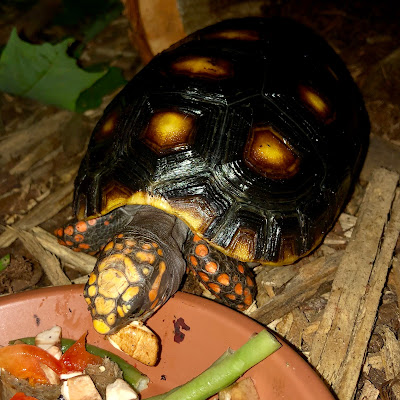 Darwin came as a tiny hatchling, and has grown to about 520g and 14.5cm (roughly a tenfold increase in weight since his arrival).  I was initially attracted to Darwin's species because they're lovely, eat a varied diet, and are relatively hardy and don't require particularly tricky care. Of the members of the creep, he knows me best and is most comfortable with me (understandable, as Chili lived in his tiny prison 2/3 as long as Nelson Mandela and Aretha is a tiny hatchling, genetically programmed to hide from anything she can't fit in her mouth).

The hard part about living with a creep of tortoise with diverse backgrounds, sizes, diets, environmental needs, and gut microbiota is that while they're a group it's generally best to keep them apart. All tortoises benefit from as much space to live and explore in as we can give them, and the realities of living in a finite house in a part of the world that has long and cold winters means that space is necessarily limited, but when possible, I get them outside on sunny and warm days to enjoy and explore and nibble at the world beyond their inside enclosures.

Chili can handle the broadest range of temperatures and humidity, so he gets outside the most. Darwin is limited to days when it gets over 75, and the low humidity of our summers means he needs extra soakings after outside playdates. Aretha is not old enough to get outside this summer, but next year she will be, and she'll be able to handle lower temps than Chili when she's grown. It's partly hidden by the netting that provides both shade and shelter from birds of prey, but the outside enclosure pictured above has a divided between Darwin's (on the left) and Chili's (on the right) section.

The truth is that they could hurt each other, either intentionally through aggression brought on by territorial or sexual tensions, or unintentionally by the sharing of macro- or microbiota that are a part of their healthy systems but totally alien to tortoises from other parts of the world. Once they've lived with me for a year or more, this is probably less of a concern, but for now, they live under not-so-strict quarantine conditions from each other.

I don't know how the creep will evolve and change over the years to come, but I am looking forward to  what comes next, and to being a part of it. 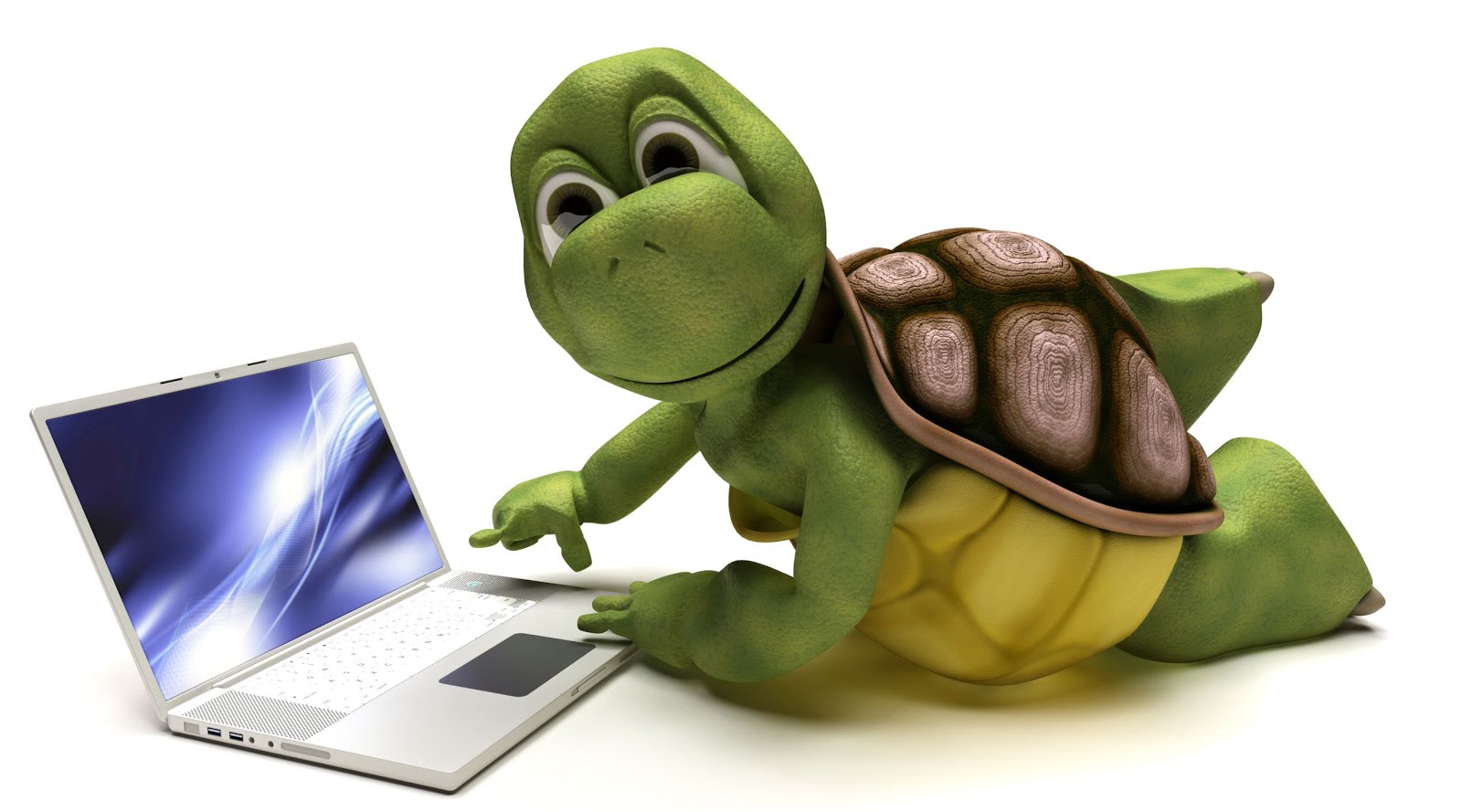